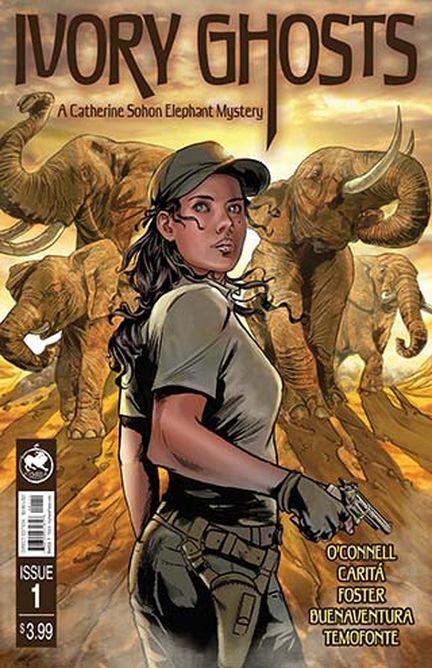 Catherine Sohon, a pilot from the wildlife investigation agency, stumbles upon a brutal crime scene at the beginning of the comic. Soon she meets Jon Bagg, a scruffy man with a rough attitude. She brings up her concerns with elephant poachers, explaining that the population needs protection, if not, elephants will be gone forever. Jon dismisses Catherine’s concerns and the struggle to expose the poachers begins.

Ivory Ghosts uses vivid and detailed artwork to tell its story. The murder mystery is compelling; while the fight to preserve elephants is enlightening. The issue of ivory trade is a real-world problem, despite the international ban on commercial trade. Ivory Ghost is an excellent tool to educate people about the ivory trade and spread the word about depleting elephant populations.

Ivory Ghosts is written by Dr. Caitlin O’Connell, who is a Consulting Assistant Professor in the Department of Otolaryngology, Head and Neck Surgery at Stanford University School of Medicine and a world-renowned expert on elephants and vibrotactile sensitivity. She is a real hero in the fight against the illegal ivory trade, which makes this comic so much more gripping. She also authored a novel of the same name, which the comic is based on.

This comic is a must read for animal lovers, activists, and graphic artist fans. The first issue is intriguing, fast pace, and exciting. Overall a very well-done comic that will leave you in anticipation for the next issue.