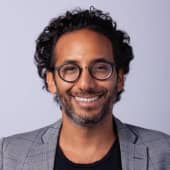 James Gutierrez has made a career of helping the community he grew up in to have access to better financial tools. He has an extensive background in creating innovative lending products to cater to the traditionally underbanked communities. Throughout his professional trajectory, he has been guided by unwavering principles, and a compassionate drive to help others. These innate driving forces have led James Gutierrez to professional success, all while maintaining an authenticity that’s impossible to ignore.

Gutierrez calls himself a social entrepreneur and he’s somewhat unique in that he started his financial career by founding his own business, Progreso Financiero, now called Oportun. It was a bold move for a fledgling entrepreneur, but one that has paid off. He followed that success by founding Insikt in 2012, another lending service for traditionally underrepresented individuals.

James Gutierrez grew up in Los Angeles as the son of immigrants. Gutierrez says that he “wanted to carry that torch and give back to the community, specifically helping to build wealth and address problems of economic inequality that persist in our country, for Latinos, and immigrants, Mexicans, people that are brown, but also the wider communities of color in the US.” To date, Aura has made more than $800 million in loans, primarily in immigrant and migrant communities.

James Gutierrez always felt that “while his clients didn’t have a lot of financial collateral, they had lots of moral collateral”. He says that’s the belief that led him to launch Progreso Financiero.

With Insikt, he expanded the model used with Progreso Financiero and brought banking to where the people were. In a physical expansion, James Gutierrez set up kiosks in places like grocery stores and community centers. According to  Gutierrez, those are places “where we could build trust, and see someone face-to-face. Then, explain to them the benefits of building credit, with the loan we’re offering. In the US, it’s a catch 22. You can’t build credit unless someone actually gives you a loan. So, you have to take out a loan, repay it in order to build credit. So, therefore, you need a company who’s willing to lend.”

James Gutierrez is the CEO and co-founder of Insikt Ventures, an early stage investment fund. Just a few of the companies that Insikt has invested in include Listol, StubHub and OKCupid. Gutierrez also sits on the executive boards of the Silicon Valley Leadership Group, Talent Inc and even his daughter’s private school. He remains committed to forwarding the missions of various social justice initiatives, and cites these as being meaningful components of his professional journey.